You are here: Home / Uncategorized / Who Are You?

You must all remember that question that people ask once in a while: “If you could meet one person, living or dead, whom would it be?”   For the longest time, I never had a real answer to the question.   There were a few candidates: men like Benjamin Franklin, George Washington, or Nikola Tesla, (to name a few).   Yet, there was never really anyone who seemed to be the right fit for the position.
What a difficult question: just anyone?;   ever?   There have, literally, been billions of people throughout the history of man.   I understand that the question is designed to show the type of person you are by dissecting the person whom you choose: someone you identify with, obviously.   Still, it’s quite a vague question.   You’d have to know yourself pretty well to be comfortable or certain with your answer.   Leaving fictional characters out altogether, do you choose an intellectual?   Do you choose a revolutionary or great warrior?   Perhaps, an inventor?   For years, I didn’t have any one person that I thought might fit perfectly into that question.   I just declined to answer.   I’m sure that lost me a few dates.
I finally figured it out the other day, though, after watching a certain film and documentary.   The next time anyone asks, I’ll simply smile, and say, Walt Disney.
Go ahead and scoff. I’ll wait.   Disney had nothing to his name but a dream when he started out.   Sure, he failed a few times, but he came out of the wringer a world-famous billionaire before he died.   People might not know whom he was as a person, but everyone knows the name and what it represents.
Take Disney World, for example.   Some might see it as just another theme park, and it is, in a sense.   Yet, what Walt intended for it to be, was a way to bring his own, make-believe world as close to reality as he possibly could.   He loved his creations so much that he wanted to walk around amongst them, like we would the characters of our favorite novels.
Disney was an artist, a creator, a business man, and a magician.   I’ll take that meeting over all others any day. 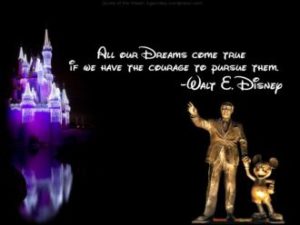