You are here: Home / Uncategorized / You Villain!

Years ago, mostly while we were still in high school, (I won’t say exactly how long ago that was), my friend and I would spend hours playing chess after I had finished delivering the local newspaper.    I’ll tell you straight out, he won nine out of ten times.    He was always better than me at board and card type games, but, I think for chess, there was another factor.
Some of my earliest memories were of my father’s collecovision gaming system.    For decades, (yes, more than one), I’ve played video games.    I’ve played mostly Role-Playing Games, (RPGs).    For those that don’t know, those are the games where the player controls the lead character of a story, from beginning to end, and takes him through his personal and emotional journey.    It would be like playing as Harry Potter through one of the books, (and I have a few times).
I’ve since stopped playing chess.    Mainly because it forces the players to sacrifice pieces in order to win.    This smacks of heartlessness.    Would Harry sacrifice Ron or Hermione to defeat Voldemort?    Evil people do that, as Voldemort did to Snape just to gain the “upper hand”.    Perhaps this is something I learned playing all of those video games; what good is winning if you have to throw your troops to the wolves?    Perhaps I’m reading too much into it.    Although, this game was invented at a time when kings did the very things that happen on the board, but to real people.
I still play the occasional game, but with a lingering pang of remorse as some of my troops fall.    I realize that it’s virtually impossible not to lose pieces, then again, that’s my point.    Which loyal warrior would YOU send to his doom?    “There’s always another way.”    Now, I just play on a giant board with over-sized pieces…. 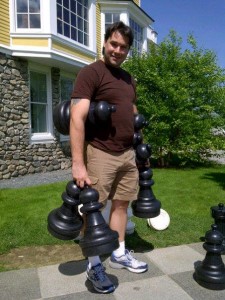